By Jon DunnSeptember 30, 2021No Comments
Henry Payne The Detroit News

Holly — When the going gets tough, the tough get going. 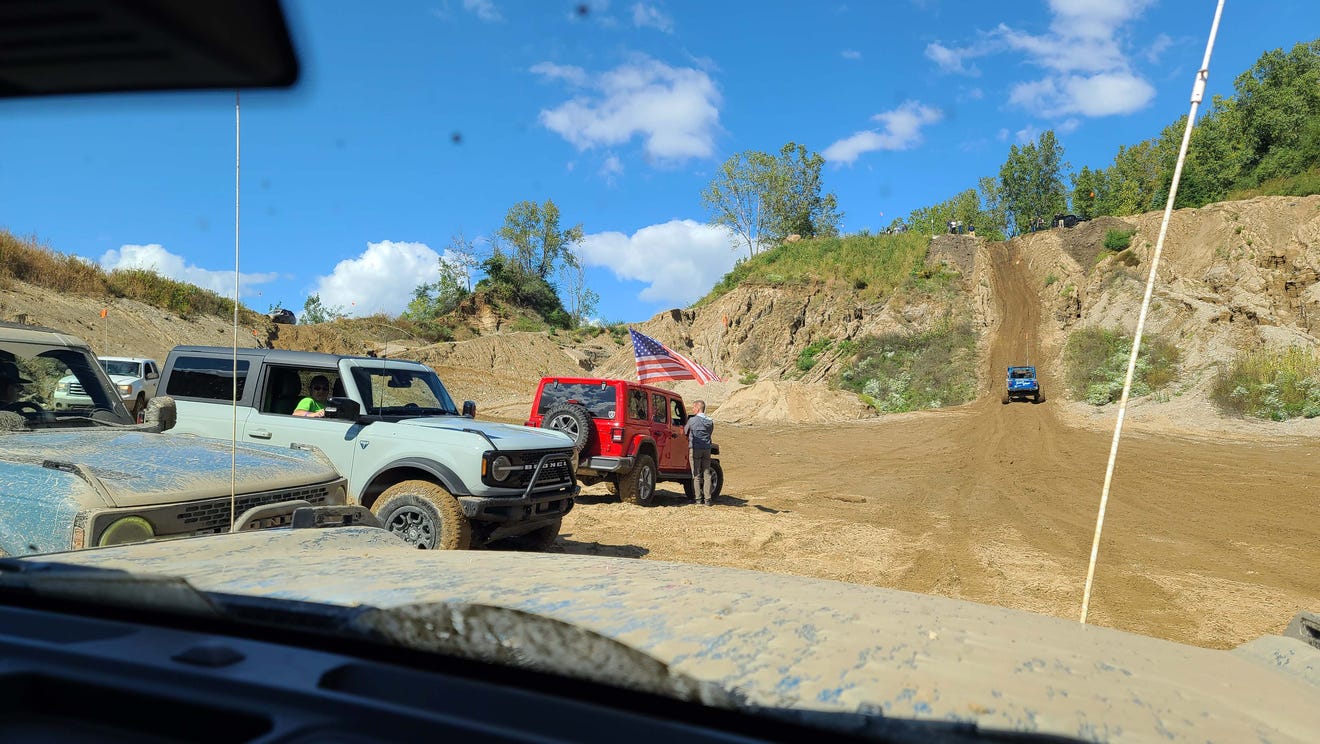 It’s a grown-ups sandbox that attracted 1,200 off-road lovers for a weekend of fun — including this big, 6’5” kid. It also brought Jeep Wranglers and Ford Broncos face-to-face in the most anticipated rivalry since a Camaro and Mustang first squared off at a Woodward stoplight.

“Let’s go!” said King of the Hammers founder Dave Cole as I handed him the keys to my four-door 2022 Ford Bronco tester.

Cole is no stranger to off-road playgrounds. He’s won the Baja 1000, Pikes Peak and countless other off-road races in extreme, Ultra4 off-road beasts. His California-based King of the Hammers is one of the country’s premier off-road racing series. This was his first taste of Holly Oaks (it just opened last fall), and it didn’t take him long to find the biggest challenges.

Darlene’s Ridge rises 125 feet above the sandy floor of Holly Oaks. Getting to the top requires traversing a narrow 30-degree gully that gets steeper as you climb. After days of rain, the trail was slipperier than an oily rope. 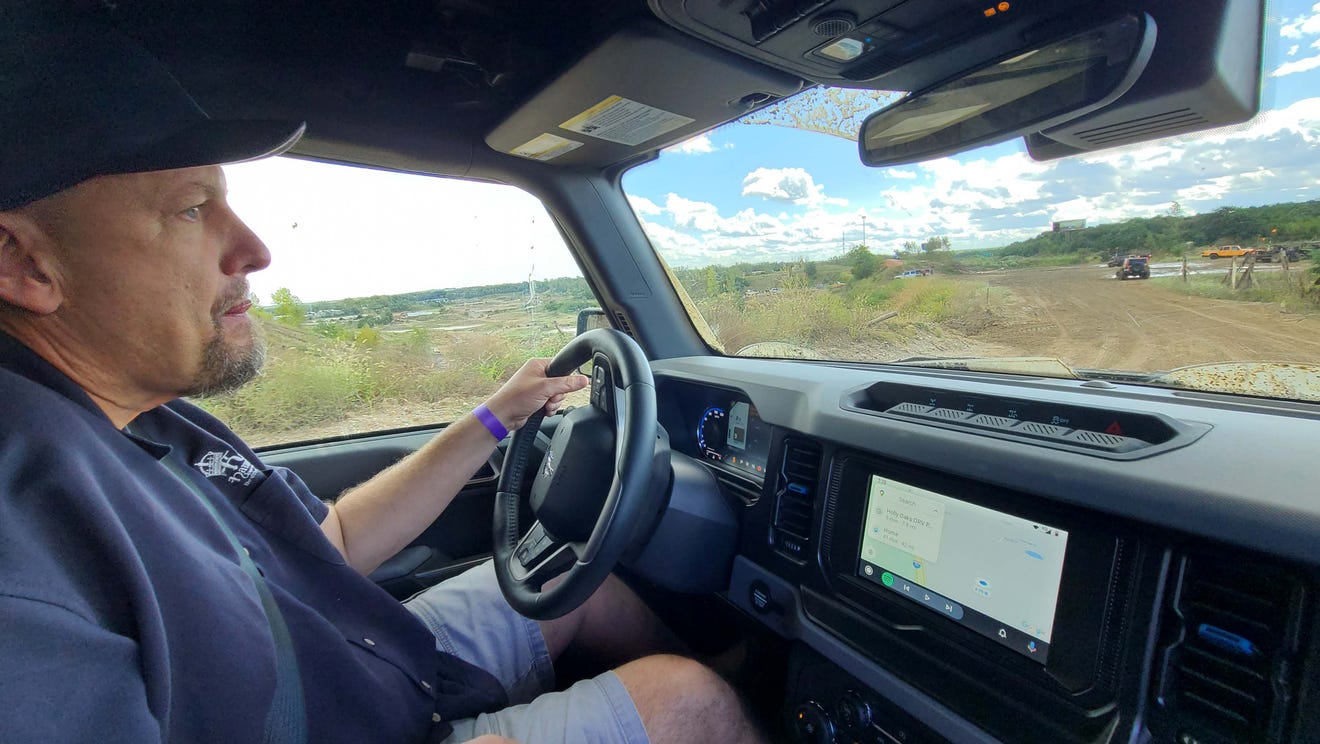 Dave Cole, CEO of King of the Hammers, pilots a 2021 Ford Bronco.

“We can get to the top of that,” Cole confidently declared after watching a 4×4 surrender after a failed assault that ended two-thirds of the way up.

Our Bronco is built for this kind of insane terrain.

Dressed in striking Area 51 Blue, the new Ford got a lot of looks in my neighborhood before I headed out to Holly. My neighbor Heather covets it for her next vehicle and liked its smooth ride, all-digital display, wireless smartphone connectivity and roomy interior (the Bronco has about two more inches of shoulder/legroom in front and seven more cubic feet for cargo than arch-rival Wrangler).=] 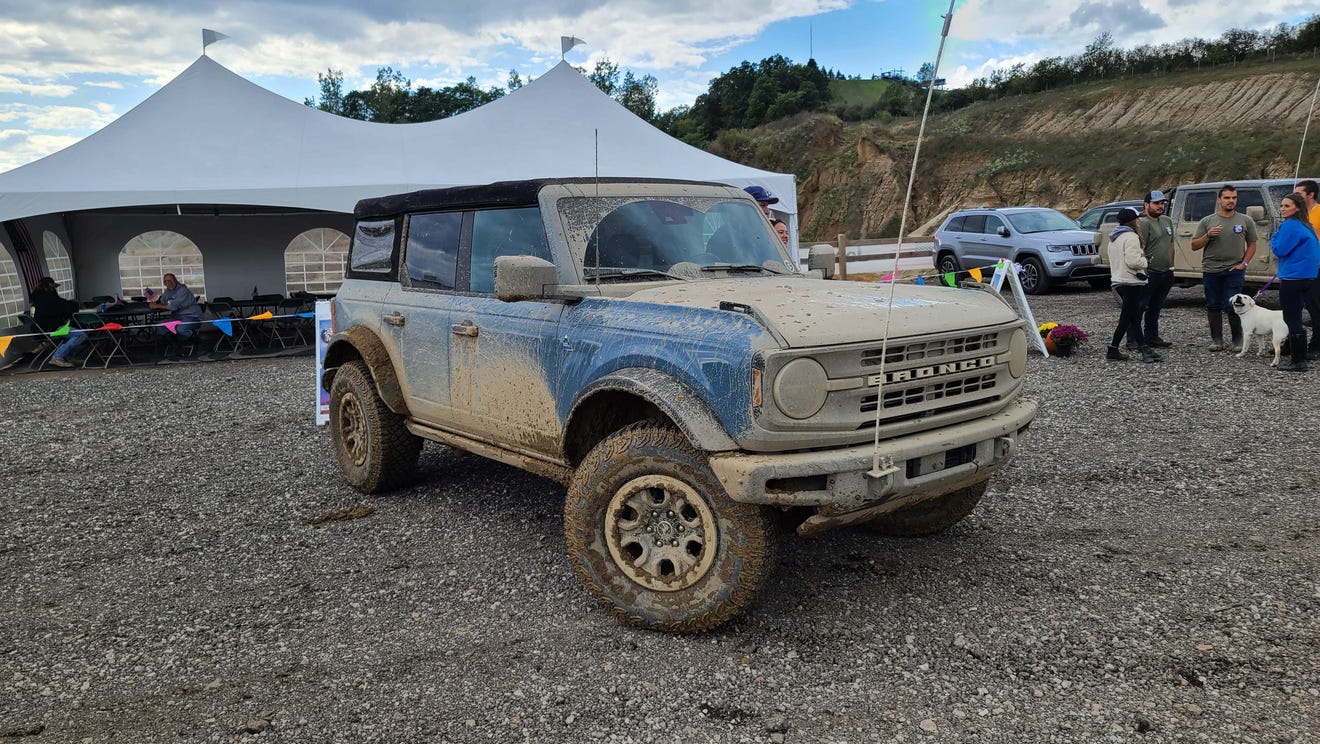 Cole dialed the GOAT (Goes Over Any Type of Terrain) mode selector to Mud/Ruts, then selected 4-wheel-drive Low.

WAAUUUGH! We charged up the incline … only to fall back at the summit, all four wheels churning helplessly. We reversed back down. Tried again. Failed. Cole toggled 4-HIGH for the next assault.

WAAUUUGH! Short again. Off-roading is a social sport. A crowd was gathering at the summit to watch what the new Bronco kid on the block could do. “Try it in manual mode, both lockers on!” advised a bystander (now that’s a guy who knows his Broncos!).

We watched two side-by-sides and a Toyota truck fail. Our turn again.

WAAAUUUGH! We made it, the front wheels leaving the ground as we cleared the top. A roar went up from the crowd. Cole punched the Trail Turn Assist feature and did doughnuts in celebration.

For years, Mustang, Camaro and Challenger muscle cars have tested each other at stoplights, twisted roads and race tracks. Now the Bronco and Wrangler are headlining new battlefields where the asphalt ends — alongside Chevy Colorado ZR2s, Ford Raptors, Ram Rebels and a growing herd of mudders.

Like their muscle car brethren, off-road competition will raise all boats — er, SUVs.

Those tools came in handy in even trickier Holly Oaks conditions when I hit the trails pre-4Fest in a steady rain. The Xterme package benefits a lineup that has a big head start on Bronco in drivetrains. 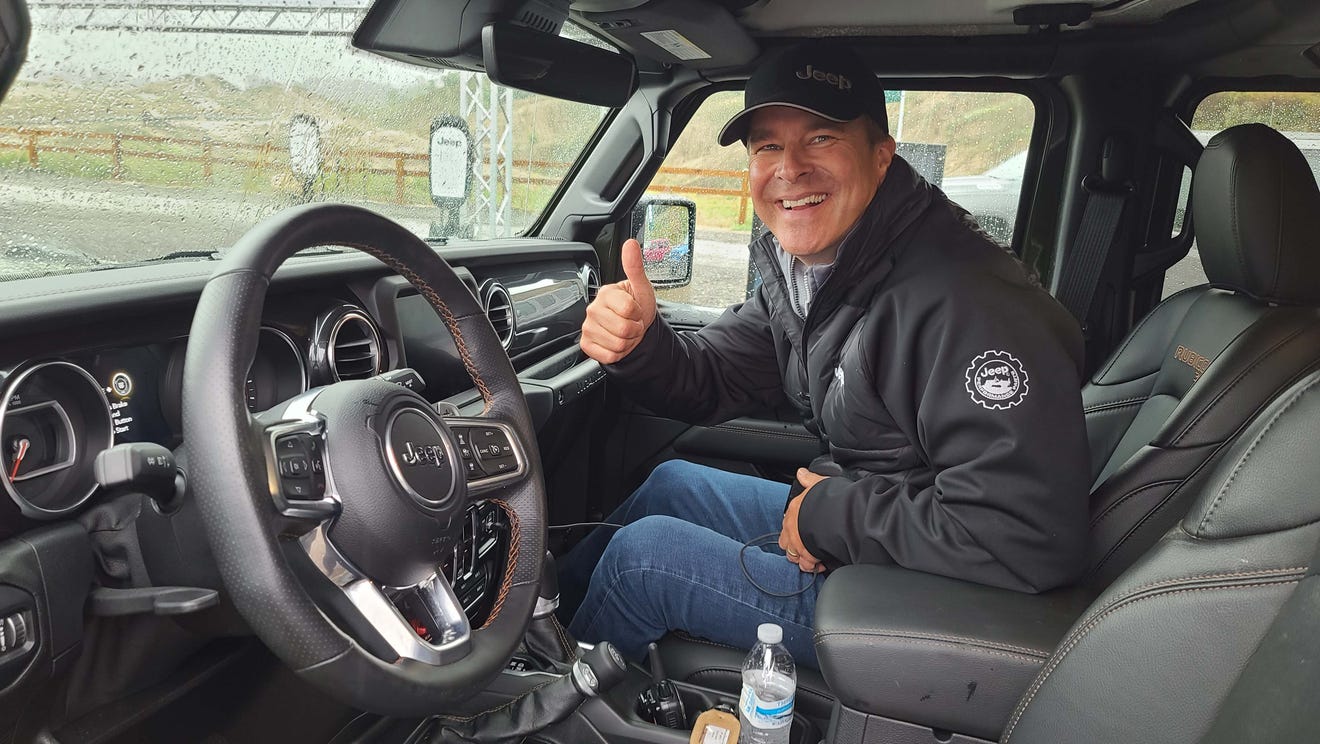 That’s 392 as in the same 392-cubic-inch bear at the heart of a Dodge Challenger Scat Pack. RRRAOOWWRR! growled the Jeep 392 Rubicon as I fired it up. My co-pilot was Jim Morrison, Jeep CEO and a passionate off-roader himself who calls Holly Oaks his backyard.

We hammered around the park’s muddy trails in 4-LOW, putting the Jeep’s trusty twin lockers and detachable sway bars to good use over rocks, hills and gullies. But the 392’s secret sauce is 470 horsepower and 470 pound-feet of torque. 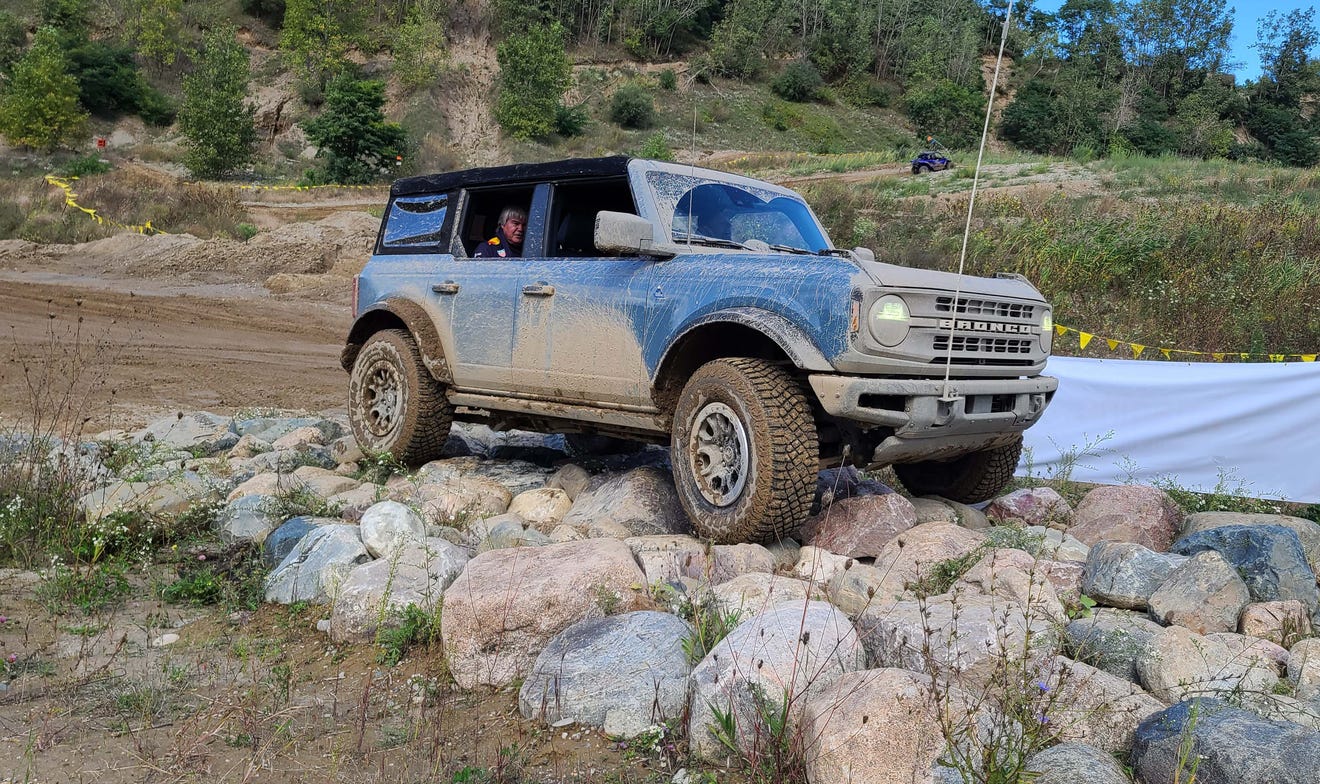 Grinding up another impossible grade, we tested the Rubicon’s Selec-Speed Control, which senses slip in all four corners — then distributes torque where needed. We hit a deep rut of mud that challenged even this tool of electronic wizardry — the Jeep slipping, sliding, struggling to get out of the hole.

I planted my right foot and the Wrangler exploded out of the hole like a mortar shell, scampering to the summit. Ya’ gotta have a V-8.

On the trail over the weekend, Bronco and Wrangler owners happily co-existed. Like muscle car track days, off-roaders are family. They help their neighbors stuck in swamps, on hills, over rocks.

Bronco riders will boast of modern tech, better on-road manners thanks to an independent front suspension, even a front hood that’s easier to open.

For my money (and, ahem, these warriors ain’t cheap), they are both correct. They give us motorheads more options for when the going gets tough.

Henry Payne is auto critic for The Detroit News. Find him at hpayne@detroitnews.com or Twitter @HenryEPayne.